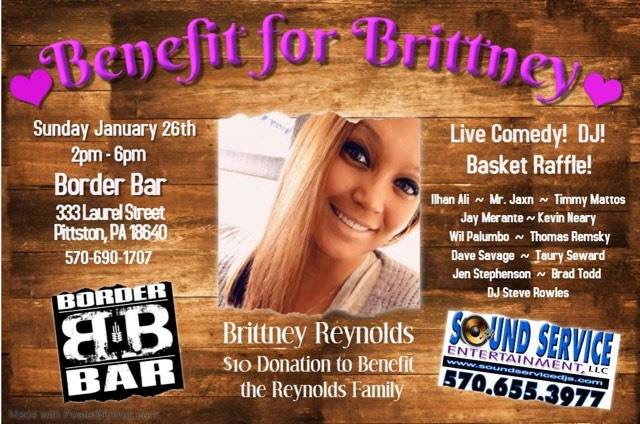 PITTSTON — To benefit the family of the victim of a recent Wilkes-Barre homicide, one local woman sought to organize a benefit to bring some happiness.

The Benefit for Brittney, held to benefit Brittney Reynolds, will be held at Pittston’s Border Bar on Sunday, Jan. 26, from 2 to 6 p.m.

The event was organized by Candice Woolston, a local woman who said she did not know Reynolds or her family, but was just stricken by the tragedy of Reynolds’ death.

“What caught my attention first was the neighborhood,” she said of the night she saw the story on the 11 p.m. news. “I used to live in that neighborhood.”

Reynolds, 26, was found dead inside a Matson Avenue home in Wilkes-Barre on Dec. 20 last year. Police have charged Zien Nathaniel Council, 18, of Philadelphia, with an open count of criminal homicide and related charges in her death.

Woolston said the said story prompted her to turn to her boyfriend and say, “I think we should do something for the family.”

Woolston’s first step was to contact her friend and local comedian Kevin Neary, who knows the family, and ask him to help set something up.

The pair contacted the Border Bar, picked a date, and soon, everything started to fall into place.

“In less than two hours, we had comics from New York and Pennsylvania, and a DJ for the sound system and music,” she said.

Music and sound will be provided by DJ Steve Rowles.

Woolston said she’s hoping the event can bring some positivity.

“We gotta do something to put positivity and laughter back out there,” she said.

According to her, there’s been a huge response, based on the RSVPs to the Facebook event.

“We’re expecting more than 200 people,” she said. “And we still have another two weeks to go.”

If you’re interested in going, a ticket costs $10 at the door. Woolston said all proceeds will go to Reynold’s family to cover any expenses they need.

The event will also feature a basket raffle, for which donations are still being accepted. If you would like to make a donation, Woolston said you can contact her through email, at [email protected]