Cider Painters’ miniatures on exhibit at Mainstreet Galleries in Kingston

Seven dolphins frolic in the waves. A raccoon peeks out of a log. A church steeple is reflected in the clear water of a mountain lake.

Those are just a few of the subjects you’ll find in the Cider Painters of America current exhibit, along with flowers, landscapes, a railroad worker decked out in traditional cap and kerchief, and ….

“How many cats are there?” artist Omar Rodriquez Jr. called out with a laugh. “I counted 30, but I might have missed one.”

Yes, cats — from majestic lion and fierce tiger to playful domestic shorthairs — are a most popular subject for the Cider Painters of America, whose hundreds of examples of miniature art are on display at Mainstreet Galleries on Pierce Street in Kingston.

They’ll be displayed at Mainstreet Galleries through the end of the year — if director Sally Casey can hold onto them that long.

“They make such good holiday gifts,” Casey said, noting customers have been buying and taking home the artwork, which is so tiny, with each painted surface no larger than 3 x 5-inches, you might be able to stuff one into a Christmas stocking.

Speaking of holidays, artist Lois Pluskey from Plains Township said her miniature painting of a snow hare gazing inquisitively at a snowman — which won an award at the juried show — will serve as her Christmas card this year.

Her inspiration for the charming wintry scene, in which the furry animal seems to wonder what kind of creature he’s met — about his size, with a carrot for a nose — was a viral video she saw on Facebook.

“A family took a video of a snow hare bunny looking curiously at a small snowman that the children had made,” Pluskey said. “It was such a sweet video, I thought, I must capture this as artwork!”

She calls the piece “Oh Hi,” reporting that’s “something my 2-year-old granddaughter says all the time when someone new enters the room.”

The Cider Painters of America is a group that was established in Dallas in 1983. Its name is inspired by the Whiskey Painters of America and the Scotch and Watercolor Society, but the founders of the local group preferred non-alcoholic drinks, so they chose “cider” as part of their name.

An invitation-only organization whose members are each allowed to invite one new person to join each year, the group has grown to include artists from around the world.

One of the international members, Christian Ryzski of Belgium, has several paintings in the show, including the church with its steeple reflected in the water.

“I feel like I could jump right into that lake,” Rodriguez said as he admired the piece, which was displayed by a sign proclaiming it “Best of Exhibit.”

Among the other prize-winning entries was “Gray Lady and the Fog,” which Fred Wengen of Lehman Township painted, inspired by a rambling Victorian house in the Back Mountain.

Although another painting he submitted depicts a lighthouse he spotted on a trip to Maine, Wengen said much of his inspiration originates close to home. Pointing to an image of a tractor in a Back Mountain barn, he said he felt called to paint it “when the sunlight was just hitting the tires in an interesting way.”

Naomi Martin of Hanover Township said she finds inspiration in attractive photographs, and with permission from the photographers, she recreated in pastels a cardinal and a flower for the Cider Painters show.

Martin is new to painting miniatures, and the vivid red cardinal she painted, titled “A Snowy Day,” won a Newbie Award from the Cider Painters.

Rodriguez, who teaches art at Luzerne County Community College, submitted a mixed-media portrait that showcases a woman with a flower in her hair. That prize-winning portrait is based on a vintage photograph the painter came across, and Rodriguez said he “wanted to do justice to this mysterious woman.”

“Hopefully, I can make her proud and continue to tell her story,” he said.

Judges for the show were Sabine Thomas and Beverly Jean Johnston, who said it was challenging to evaluate more than 325 pieces involving different media, including scratchboard, which was new to the competition this year.

“The artist scratches off dark ink to reveal a white or colored layer beneath the art as a new medium,” Johnston explained. “We were blown away by this medium … that we never dreamed would produce such beautiful artwork.”

“Of course, considering the size each artist works with is 3 x 5 inches,” she added, “the work is amazing.”

The precision an artist has to develop to create such a small image improves that person’s larger artwork as well, Wengen said.

And, as you might suspect, some of the Cider Painters use magnifying glasses as they paint.

Two customers who visited Mainstreet Galleries on a recent afternoon likewise peered through magnifying glasses, the better to admire the artwork.

“The more you look,” Scott Sauerwine of Luzene said appreciatively, “the more you see.” 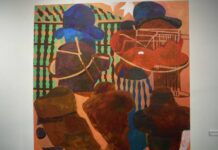 Artwork of Ryan Ward on display at Circle Centre 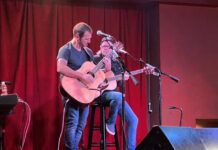 RiverVibes concert to be held at the Cooperage