That’s A Wrap: Enjoy a night at the opera with ‘Porgy and Bess’

Eric Owens and Angel Blue star in the title roles of ‘Porgy and Bess.’ 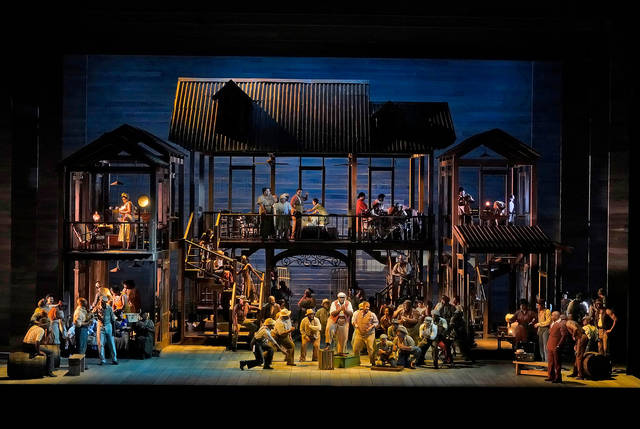 Eric Owens and Angel Blue star in the title roles of ‘Porgy and Bess.’
The Metropolitan Opera

Fighting, dancing, gambling and sinning. These are the things I would expect to find while watching a movie. But on a Saturday afternoon, I treated myself to a different experience when I watched the Metropolitan Opera’s “Porgy and Bess.”

The celebrated Gerswin opera is part of the 2019-20 Live in HD season with productions being simulcast in theaters around the world. It was a great opportunity to catch its return to the Met after nearly 30 years, and the performances have received rave reviews far and wide.

Catfish Row is a microcosm of Charleston, South Carolina, where the residents range from mothers to fishermen, food merchants to drug dealers. They all live in overcrowded slums where money can be traded for life or death. In the middle of it is Porgy (bass-baritone Eric Owens), a disabled beggar with a good heart. In contrast, there is Crown (baritone Alfred Walker), a brute who likes whiskey and cocaine, known as “Happy Dust.” By Crown’s side is Bess (soprano Angel Blue), a woman who battles her inner demons through her boyfriend’s same vices. The women of Catfish Row don’t accept Bess, especially the god-fearing Serena (soprano Latonia Moore) and the “Mother of Catfish Row” Maria (mezzo-soprano Denyce Graves). Porgy, smittened by the troubled soul, comes to Bess’ defense. But when Crown murders one of the inhabitants and flees the Row, Bess is on her own, and Porgy offers his love and support.

To get an idea of how much this opera resonates with aficionados, there was such a high demand for tickets at Cinemark 20 and XD in Moosic that the theater had two screens for the simulcast. Most of the seats for the first screen were sold weeks in advance, and both screenings were nearly sold out. This was my third Live in HD series event, but it was the first time I bought my ticket nearly a week early.

I also don’t consider myself to be an opera fan. I look for operas that are familiar to me, and “Porgy and Bess,” which has been on Broadway and made into films, was one of them. The other two operas — “The Exterminating Angel” in 2017 and “Marnie” in 2018 — were based on well-known source material. And like those who watch movies based on the cast, I was looking forward to seeing Graves. In the early 2000s, I witnessed her greatness live on stage, and her singing made me cry with joy. She had a supporting role in “Marnie,” but it didn’t do her justice. In “Porgy and Bess,” she was not only the neighborhood’s mother. Graves was the monarch passing the torch to a new generation of black opera singers. Some of the primary cast members were making their Met debut with this production, like Frederick Ballentine who plays the snake-like dope pusher Sportin’ Life.

Moore and Blue were the perfect contrast of the saint and the sinner, from their costumes to their vocal choices. While Serena is more of a churchgoer than Bess, Moore added jazz elements to her delivery. Blue elevated the addict’s plight with her range, sounding more like a lady who has lost her soul than a loose woman.

But the heart of the production was Owens. Before the opera began, director James Robinson warned that the baritone was battling a cold, but he wanted to give his best to the audience and those watching in movie theaters. Best is too little of a word to describe Owen’s performance. Owens showed Porgy’s love for Bess and desire to save her. His voice was powerful despite his illness, and as the cast accepted their applause, his face covered with sweat and exhaustion showed how much of himself he gave to the audience.

Cinemark 20 is showing an encore presentation of “Porgy and Bess” at 6:30 p.m. Wednesday. Tickets are available at the box office, but I highly suggest ordering them early through its website or app. In a region that is an opera desert, at least you can enjoy a night at the opera at the movies.