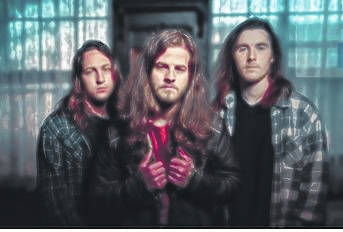 Another Day Dawns is led by Dakota Sean with Tyler Ritter on guitar and Nick McGeehan playing the drums.
Submitted photo

LEHIGHTON — Another Day Dawns is an active rock band formed in Lehighton in 2010.

The band, led by Dakota Sean with Tyler Ritter on guitar and Nick McGeehan playing the drums, found footing in both local and out-of-state radio markets with their new single, “Taste of Heaven,” and will be releasing a new record on Saturday, featuring the song, titled “Stranger.” The band will host a release party at One Center Square in Easton to mark the occassion.

Manager John Phillips has reason to be optimistic, but what seems to excite him the most when talking about Another Day Dawns is the band’s sound.

“Everything this band has done has been professional, the last EP (extended play record) was recorded in Allentown. This new EP was recorded in Nashville in a larger studio called Dark Horse. It’s a whole new ballgame,” said Phillips when asked for his thoughts on the progression of Another Day Dawns’ music over the past decade.

Another Day Dawns is not only up-and-coming band, but, according to a recent press release,they have worked on one song off their new record with two people whose association could give them an edge in the Active Rock market.

“Am I” was co-written with Desmond Child, a songwriter from Nashville who has worked with such names as Bon Jovi and KISS, as well as Aaron Bruch, of the band Breaking Benjamin, who formed in Wilkes-Barre in 1998.

The passion and connections this band has are likely what landed them their spot at two major upcoming rock festivals which Phillips could not yet disclose. However, he did make it clear that each gig is an impressive opportunity for an unsigned band.

When asked weather Another Day Dawns would be an act to remember, Phillips had this to say:

“I’ve always said to Dakota, ‘you have 30 minutes on the stage to make sure they never forget you. What are you gonna do?’”

When Another Day Dawns begins their radio tour at the end of this month and takes the stage this spring, Dakota and his band will answer that question with a microphone, an electric guitar and a drum set.

For more information on Another Day Dawns, go to anotherdaydawns.com.